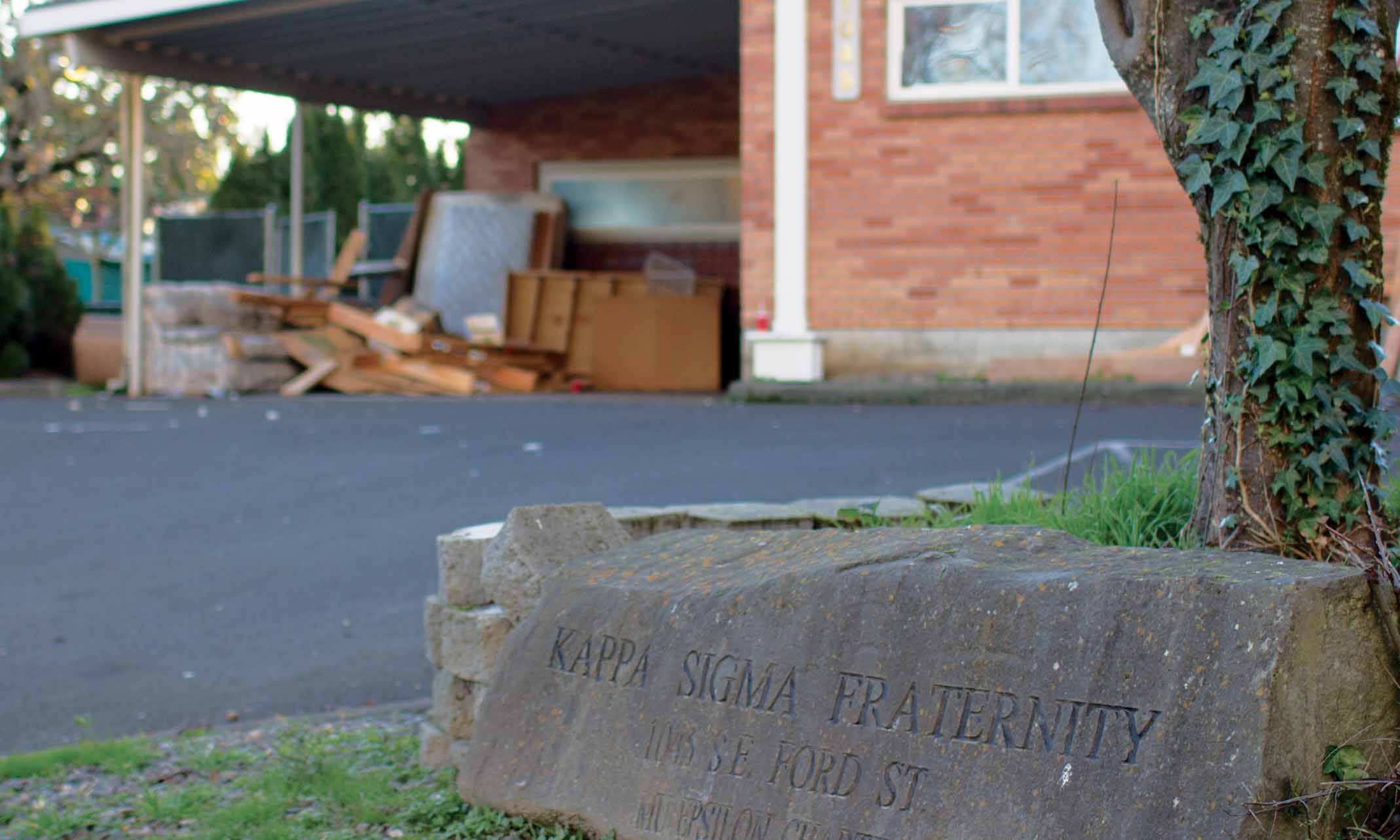 The Kappa Sigma fraternity had a membership review which left the Greek organization with about 11 remaining members. The brothers who lived in the house had to move out of the chapter house in February. (Michaela Fujita/Photo editor)

The Kappa Sigma fraternity had a membership review which left the Greek organization with about 11 remaining members. The brothers who lived in the house had to move out of the chapter house in February.

The Kappa Sigma chapter at Linfield lost its house after national code of conduct violations prompted a membership review and the disaffiliation of more than half its members, according to disaffiliated member of the K Sig executive board and junior Tom Steelhammer.

With about 11 members remaining in the chapter, the Greek organization could no longer afford their house.

K Sig brothers had conflicts with their national code of conduct such as the involvement of I-Week, which Linfield allows but is banned by the national Kappa Sigma Fraternity, according to Steelhammer.

In October and December members reported two medical clemency incidents to Associate Dean of Students and Director of Residence Life Jeff Mackay, who then alerted the chapter’s nationals.

After the December incident, the chapter’s district manager decided to conduct a membership review of the K Sig brothers and the immediate suspension of the executive board members.

“At first when we heard that we were going to have this membership review everyone was pretty optimistic. We thought we could fight through it and everything, and then once everyone was pretty much kicked out, at that point it became a very young group of men without a lot of experience getting handed this mess,” Steelhammer said.

The membership review involved questioning of all members by a board of alumni.

The district manager found out about the violations against Kappa Sigma’s code of conduct through the membership review interviews, which ultimately ended in the loss of many members.

Steelhammer attributes the current circumstances of the fraternity to a “change in culture” of what was allowed in regard to membership activities. The chapter conducted itself in ways that were against a shift in national organization values.

“It was mostly a cultural movement. There are a lot of things that have happened in the past that go unseen or unscathed, and then you can have two events and all of a sudden something else comes to light and a lot of it has to do with the attention that was paid to by our chapter from the district managers. For a while we didn’t have a district manager so the chapter as a culture basically got away with a lot of things that broke the Kappa Sigma code of conduct,” Steelhammer said.

The disaffiliated K Sig member stated that “fraternities are a liability and a lot of responsibility.” He admits that although the chapter is disappointed with what happened they understand that “we cannot point out any individual; it was a cultural thing that just got carried on for too long and went under the radar for too long,” Steelhammer said.

There were many rumors about what happened to the fraternity on social media like Yik Yak, ranging from hazing issues to sexual assault allegations. Steelhammer said any opportunity to “clear the air” about K Sig is important, and that “students should know that culture changes are the hardest to make happen. It can either be a slow, grueling process or in this case, a sharp and brutal process where you have to suddenly make it happen.”

Director of College Activities Dan Fergueson reported that all of the 25 members who had been living in the house had to either move into on-campus housing or off-campus depending on their class standing.

Despite the loss of their house, the challenge to their charter by the national organization, and their small number of members, Fergueson assures students that K Sig remains a legitimate fraternity on campus.

K Sig’s housing board, which is made up of alumni, decided that the house was a liability and so the house was taken away. The current homeowners are trying to sell it, according to Steelhammer.

Fergueson said that the house would have to be updated to McMinnville and Yamhill County’s fire code regulations before anyone else can move back into the house.

With the loss of their house, the remaining members of K Sig are now using the fifth meeting room in the basement of Miller Hall as their chapter room, which has previously been used for storage.

Steelhammer is optimistic about the future of K Sig, and said the remaining new, young members can hope to rebuild the fraternity.

“The group of guys that are in there right now are easily on the best guys that we have had come through so I think that if anyone can do it, it’s them. At the same time it is going to be hard being one of the smaller fraternities, but that leaves more chances for leadership positions and roles for the fraternity,” Steelhammer said.

Helen Lee and Rosa Johnson can be reached at [email protected]