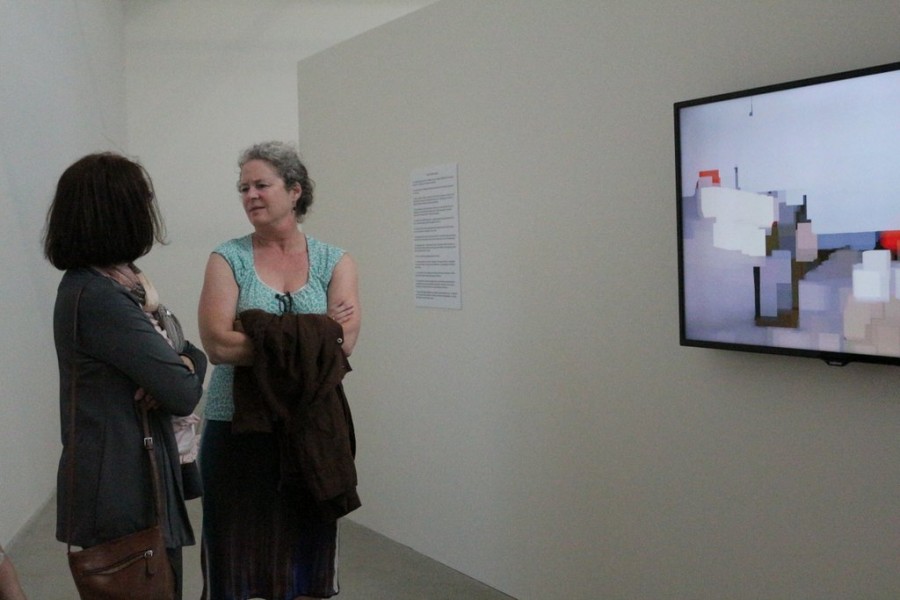 Two women discuss Peter Campus’s piece at his Artist Talk on Aug. 27 in The Linfield Gallery.

NYU professor’s art makes its home in the Linfield Gallery

Lifetime artist and videographer Peter Campus held an artist talk on Aug. 27 in the Vivian Bull Center for his gallery “isthmos.” From Aug. 25-Sept. 30 Campus will feature seven of his works in The Linfield Gallery.

Most of Campus’s early works are projected onto walls for crowds to view video footage that is looped for various periods of time. One piece Campus created called “Anamnesis” projected the viewer in real time and had another camera play a delayed stream in order to skew the viewer’s perspective.

Campus would add additional flair to his other projection projects like rotating the images of his subjects or angling his projector in order to present the image differently from what people are used to seeing.

“We do know that our eyes see opposite of what is around us and that our brains tell us which was is the right side up, I like to flip the viewers’ perception to make them question what really is ‘right side up.’” Campus said at his artist talk.

One of Campus’s first gallery installation pieces from 1971 called “Kiva” is now owned by the Whitney Museum. Shortly after his debut, Campus had his first solo show in ’72 called “interface.”

Along with being an artist, Campus studied experimental and cognitive psychology and currently teaches at New York University as a Clinical Associate Professor of Art and has been there for over 30 years. In 1990 Campus switched his videography from film to digital that changed his style to a more colorful and digitalized composition.

Curator and Director of The Linfield Gallery Cris Moss attended graduate school at New York University and met Campus there and had him as a professor during September 11, 2001.

Around this time Campus was also diagnosed with cancer. In order to cope with radiation and his other cancer treatment Campus recorded a short film called “Death Threat.”

Campus recorded other emotional pieces that featured up-close face shots one of which is a 12 minute piece called “Head of a Man With Death on his Mind” that was filmed after the death of his father.

“We very much acted like an actor and a director to achieve this piece,” Campus said referring to the “Head of a Man With Death on his Mind.” Although Campus’s style has changed and varied since he first began working with mixed media at the age of 13, he continues to grow and adapt as an artist. From painting to black and white film photography, Campus has produced a range of compositions from portraitures to landscapes.

“Making art is the most wonderful thing I can think of doing. It makes me happy to make art I love sitting in my studio making art,” Campus said. Since 1972 Campus has had over 40 solo shows and there is no doubt that he will have more in the future.

Peter Campus’s website has portfolios of his videos along with his contact information if you wish to reach him. – See more at: https://thelinfieldreview.com/16581/archive/culture/nyu-professors-art-makes-its-home-in-the-linfield-gallery/?preview=true&preview_id=16581&preview_nonce=c2ef1a22f3#sthash.p1bZNZc2.dpu